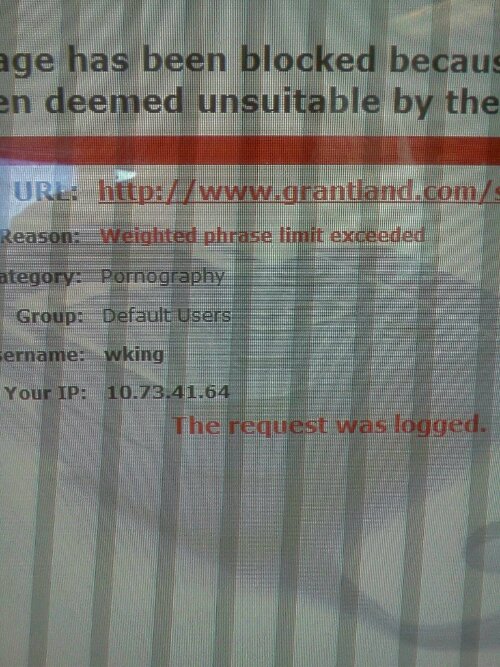 The internet blocking software at my place of business has deemed Bill Simmons as pornography.

Either Bill has found new work or he is still a sports columnist and my job needs new software.

Apparently my mouth got me blocked by a former mega sports star!

At least he re-tweeted my comments to UFC President Dana White.

I admit I was excited for this fight when it was announced. I envisioned a flash of a fight ending in a vicious KO.

What I got was mild action and a weak ending. I can’t complain about the ending too much. The clash of heads was certainly vicious, just not the KO I was pining for.

The fight was steady throughout with Gamboa winning every round except for the 1st which I gave to Ponce de Leon. Even though Gamboa won every round it was a closer fight than the score would indicate.

Ponce de Leon lunges way too much, especially against such a deadly accurate puncher like Gamboa, but Gamboa seemingly takes a good 30 seconds off every single round and Ponce de Leon took full advantage of those seconds with solid body shots and looping lefts. Some of those lefts gaining the attention of Yuriorkis.

The clash of heads came in round 8 as they were both coming in to throw a punch.

Gamboa was on his way to a semi-easy victory, but I have doubts to his ability to stay on point for all three minutes. Stepping his game up against the absolute best in the world and taking off 30+ seconds a round is not going to end well for him.

He called out Pacquaio, who he will not be seeing in the ring. Even though Juan Manuel Lopez lost his last fight against Orlando Salido I would still love to see a fight between him and Gamboa. Young up and comer Mikey Garcia would also make a nice match-up.

A fight I would absolutely drool over for Gamboa would be the young Gary Russell, Jr. I realize Russell Jr. is only 23-years-old and has fought a mere 65 rounds as a pro, but he has something special in him. If a year from now Gamboa and Russell are within 5 lbs of each other it needs to happen.

Tomasz Adamek vs. Vitali Klitschko
From Wrocław, Poland for the WBC heavyweight title

The fight went just about how you’d imagine.

Coming in I thought for Adamek to have even a punchers chance he would have to open it up and just let the punches fly. In the first round he did no such think and it appeared as if he was content to just take his beating, collect his check and be on his way.

Then round two began. Even though this was the most dangerous approach (and sure to end poorly for him) for him, Adamek let the fists fly. It wasn’t going to realistically change the outcome of the fight, but it was going to at least make it worth watching. At least more so than that dreck of a fight between Vitali’s brother Wladimir and David Haye.

The story for this fight was Vitali’s jab (which could second as a straight right for anyone else). He consistently jammed it into Adamek’s face and by the time the ref stopped the fight in the 10th his nose was a bloody mess.

Rounds 1 through 10 were almost near carbon copies of each other. Vitali would jab, through some overhand rights, mix in a few uppercuts and Adamek would do his best to move, cover-up and try to retaliate.

Adamek did try to retaliate, even landed a few good body shots, but nothing Vitali couldn’t just absorb.

Klitschko handled what little Adamek dealt and gave him back blow after blow until his nose was bleeding everywhere, he could barely stand and by round 10 the ref finally, mercifully, stopped the fight.

It’s my opinion (as I’m sure it’s others as well) that there isn’t anyone in the heavyweight division that can beat the Klitschko’s. With the slight exception of each other of course.

I would, however, love to see a David Haye vs. Tomasz Adamek fight.

This is the man who threw for 30 TD’s and 4,710 yards at 66% completions throwing to guys like Patrick Crayton, Legedu Naanee, and Seyi Ajirotutu. Now this season he has Vincent Jackson & Antonio Gates (mostly) healthy. Naanee or Ajirotutu as a 3rd receiver or in the slot is fine, but as a #1 or #2 is not going to end well for most QB’s. Philip Rivers is going to have a ridiculous season. I can see 4,900 yards and 34 TD’s.

When you are half way through your rookie season and people are already referring to you as being one of the top 3 DT’s in the NFL you know that man is a special player. Barring injury, Suh is going to rack up a bunch of these Defensive POY awards. Not to mention Pro Bowls and All-Pro teams. Suh is as dominate as position as any player at any position. Man is a beast.

In my opinion Jones is the most NFL ready of all rookies this season. He has had his off moments in the preseason and he does drop too many balls, but he’s as ready as they come. He has a true pro at QB throwing him the ball and one of the top 5 receivers on the other side of him in Roddy White.

I could have went in plenty other directions here with Patrick Patterson, Jimmy Smith, Ryan Kerrigan or Adrian Clayborn. I settled on Von Miller because he appears to be the most clean cut and ready NFL prospect.

Finally gets his Houston Texans over the hump and they excise those nightmares of Peyton Manning and the Colts and win the AFC South. With Arian Foster, Andre Johnson, and Matt Schaub on offense and a defense that is certainly improved with Jonathan Joseph & Danieal Manning in the secondary and Wade Phillips can work wonders as a defensive coordinator.

I feel pretty decent on most of my win/loss predictions, with the exception of a few.

One in particular is the Indianapolis Colts. With even a slightly injured Peyton Manning the Colts are a solid 10 win team.

Without him? They are on the clock for a top 5 pick in next years NFL Draft. That is the risk you run with you have a player who accounts for so much of your offensive production. When he’s healthy and right everything is peachy, if he manages to get hurt? Might as well write the season off.

The other team I am wholly unsure of is the Philadelphia Eagles, the supposed Dream Team of the NFL. It’s true they amassed a king’s ransom of talent in some spots, but they left others completely alone. With the additions of Nnamdi Asomugha, Ronnie Brown, Vince Young, Dominique Rodgers-Cromartie, etc… they strengthened themselves greatly. Now they have a game ready backup QB, a talent rich secondary and defensive line. END_OF_DOCUMENT_TOKEN_TO_BE_REPLACED