This is a must see fight. Two of the best technical boxers in the sport going at it. 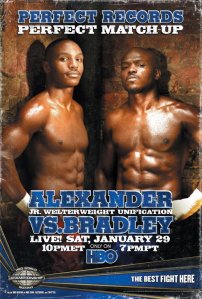 It’s also a fight that we as American boxing fans haven’t seen in some time. This fight will mark the first time in the last 24 years that two undefeated American fighters will fight to unify titles (in any weight class).

Surprising I have to admit.

As soon as this fight was announced I was overly excited for it. It’s not too often these days that two young fighters either in or near their prime (Bradley is 27, Alexander 23) have faced off in such a critical fight.

(Side note: I despise the fact that fighters and their promoters seem to be more worried about money than legacy and so they mortgage their current prime by facing a smorgasbord of mid- to low-level talent, think Julio Cesar Chavez Jr, or Andre Berto.

It’s not that I hate on fighters or their promoters for wanting to make money, but if you are as good as you say you are you’d put that money where your mouth is.)

I believe two things to be near certainties in this fight.

1) The fight will go the distance. Neither fighter has what you would call pure power.

2) There will be approximately 2 million punches thrown as both fighters throw punches in huge bunches.

Reason #2 is the reason I think this fight will be action from start to finish. Outside Alexander possibly landing a shot on Bradley in the same way he KO’d Juan Urango last March, I think this is a definite 12 rounder.

In my opinion, this is a spectacularly hard fight to predict. I’ll try anyway.

I love both fighters style and how they can seemingly bully themselves around the ring despite the fact that neither of them has any real power. What they both do have is the ability to throw massive amounts of punches at near Mach speed.

I like Bradley and part of me wants to take him in this fight, but Alexander just seems a tick better right now.

The judges will probably be as schizophrenic as I am with this and so….

Overall it was an average fight with a few pretty good moments.

Alexander, for lack of a better word, quitting after an accidental head butt with Bradley in the 10th round was extremely weak. I don’t like to question an athletes injury without having all the facts, but damn, Alexander seemed by all rights very capable of finishing the fight.

He now has a lot to prove in my eyes, while Timothy Bradley just cemented my thoughts about him. Bradley suffered butts and an overabundance of holding by Alexander and fought through it all, while Alexander now has to prove he won’t fold in the face of pressure.

All that aside the fight did go to the scorecards because of the accidental butt forcing Alexander to ‘quit’.

Bradley by TD over Alexander 96-94

Published by Will King

View all posts by Will King